I knew virtually nothing about my grandfather’s early history when I started my research, except for the assumption that he was of Polish heritage. After talking with family members and obtaining vital records, I learned that his story was a sad one. I quickly learned from interviewing family members that my grandfather and his six siblings grew up in an orphanage on Long Island. Initially I had jumped to (the wrong) conclusions about this; I had assumed that his parents gave the children up for adoption for some reason – economic, personal, or otherwise. I nursed a bad opinion about them, before I had all of the facts. Probably a common error in judgement, when one is a rookie genealogist.

Eventually, after obtaining their death records from the state of New York, I learned the sad truth; both parents had died within a short time of each other in the year 1914. Albert went first on September 1st, from tuberculosis, and Maryanna died a month later on October 8, from the same illness.

Albert and Maryanna have their own interesting story. I found that they were actually from Austria rather than Poland as we had assumed, but the town of origin is not very legible, so I can’t place it on a map. I think the borders were pretty fluid back at that point in history, so what was once considered Austria may very well be part of Poland today.

All of the boys were placed in the St. John’s orphanage system. My grandfather John would have been eight years old at the time. There were two branches of St. John’s, one of them was in Brooklyn, and the other was in the more rural setting (at the time) of Hicksville, Long Island. The Hicksville branch was located on a working farm that produced fruit and dairy products which were used by the two orphanages. According to the HixNews website, at one time there were 200 boys who worked the farm. My grandfather was one of these boys. 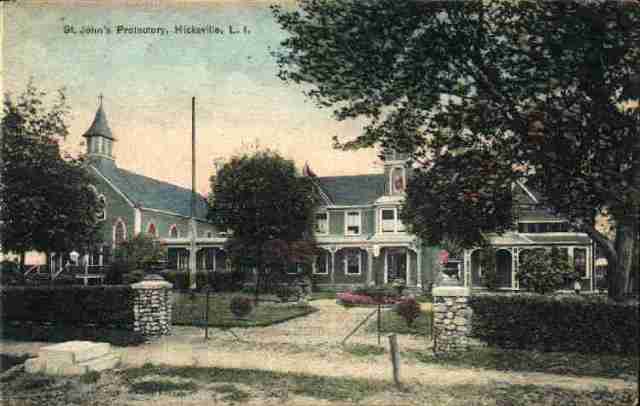 While at the orphanage, the boys were baptized, and for some reason at this time the spelling of their last name was changed from “Wasniak” to “Woznick”.

To say that my grandfather was miserable in the orphanage would probably be an understatement. There were dark hints that he was treated harshly by the nuns there, and when he was old enough to go to Hicksville to work on the farm, his life was no better. In his very early teens he was placed with a particular local farmer, but he told stories to the family about being beaten and made to sleep in the coal shed, in freezing cold weather. He ran away.

Eventually, at age 15 or 16, he got a job with the Long Island Railroad, where he would work for the next 50 years. He became a “flag man” – I’m assuming that it was his job to signal to or direct the conductor, using his flags. I have vivid memories of him coming home from work every day, carrying those flags, and carefully placing them in the hall closet after he walked through the front door of the house on Maple Street.

John married my grandmother, Wilma (“Willie”) Moseman in 1928 and they raised four children together. He was really good at buying his grandchildren ice cream, just before they were supposed to eat dinner.